ATHLETE OF THE MONTH APRIL 2012

LIMERICK runner with strong Cork connections got the perfect send-off to next week’s European Championships when she was yesterday named as the Cork City Sports Athlete of the Month for April.

Orla Drumm, a native of Dooneen but who has been representing UCC AC for the past nine years, got her track season off to a flying start at the Leevale Sports in April when defeating the rising star of Irish athletics, Ciara Mageen, over 1500m in the impressive time of 4:14.48.

She then went on to set a personal best of 4:13.27 at the Payton Jordan Meet in California before proceeding to knock aver three seconds from that time at Dessau in Germany, her 4:09.95 placing her ninth on the all-time Irish list.

“It’s really nice to be honoured here in Cork; I’ve been running now for UCC since 2003 and used to train with them when I was based here,” said Drumm. “I’m now coached by a Corkman, Ed Coughlan, who is a native of Douglas but who is a sports scientist in the UK and I’m the only athlete he coaches.”

The 28-year-old has good memories of Cork, having finished third in last year’s Evening Echo Mini-Marathon after finishing sixth the year before. She is now looking forward to returning for the Cork City Sports on Tuesday July 17 where she will compete in the one mile event. “I’ve never really run to potential at the Sports, I fell in my race last year so hopefully this time I’ll get on a bit better. I ran the mile in Los Angeles for the first time recently where I recorded 4:36.81, I was happy enough with that but would hope to do a bit quicker in Cork.”

But first there is the Europeans which begin on Wednesday next and continue until the following Sunday. Drumm runs in the opening round of the 1500m on the Saturday morning and knows she will have to set a lifetime best to qualify for the final. “I need to run a big personal best but I feel I’m in the shape to do it, and that’s the aim,” she says.

Tony O’Connell, Chairman of the Cork City Sports, congratulated Orla on her recent achievements and wished her well in the coming week at the Europeans. He also thanked the sponsors of the monthly awards, The River Lee Hotel, Evening Echo and 96F & C103FM. 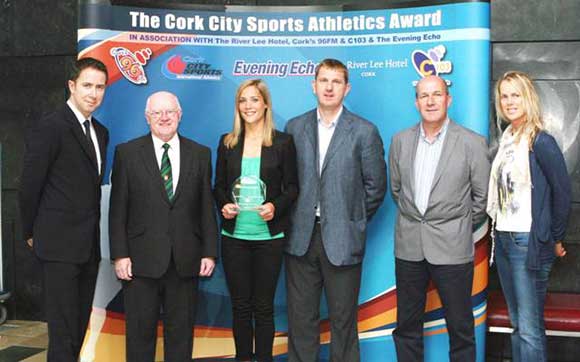