It is with great sadness that we announce the passing of Ian Richard Jagoe after his long struggle with dementia.

Ian was the youngest son of John Oliver Jagoe, one of the founding fathers of the Cork City Sports and an Irish International miler, for whom the John O Jagoe Perpetual Memorial Trophy is named. A sportsman in his own right, Ian was an avid hurdler and rugby player as a youth, and a proud supporter of the Cork City Sports. 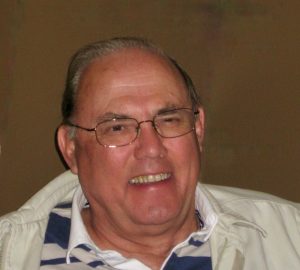 Born in Delhi in 1940, Ian retuned to Cork when he was 6 years old. He later attended Methodist College Belfast where he became an Ulster Schools hurdling champion. He went on to study psychology at Queen’s University Belfast, where he met the love of his life, Joan, whom he married in 1965. After leaving university, Ian moved to London, which led him to a long career at IBM that took him and his family to such diverse places as Austin, Texas and Paris, France.

Ian remained a proud Cork man no matter where life led him. One of his fondest memories before dementia took hold of him, was his last visit to attend the Cork City Sports International Athletics Meet and Gala dinner in 2009. He was home.

Ian is pre-deceased by his wife Joan (McEnaney) and survived by sons, David (Paul Checkley) and Chris (Roberta), and grandchildren, Catherine and Michael.

Ian’s life will be celebrated by family and friends on September 6, 2022 at Mortlake Crematorium in London, England.

In lieu of flowers, the family has graciously asked for donations to the Cork City Sports in Ian’s memory.

Frank Walley President Cork City Sports states; on my own and on behalf of the Committee of Cork City Sports and the athletic fraternity in Cork, Ireland and beyond, I wish to express my sincerest and deepest sympathy to the Jagoe Family and friends on the recent passing of Ian Jagoe.

The Cork City Sports now a renowned international fixture and the premier Athletics Meeting in Ireland is synonymous with the Jagoe name,as we honour our founder John O Jagoe and his son Ian Jagoe.

Ian will be remembered at the 2023 Cork City Sports (70th) when the Committee will name a race in his memory.