Rob Heffernan received the Athletics Person of  the year for 2012 at the Cork City Sports Award Ceremony, in association with the Evening Echo, 96FM, and theRiver Lee Hotel. The ceremony was held in the River Lee Hotel

Rob Heffernan who finished 4th in the 50km walk in the Olympics doing  in a time of 3:37.54, this would have won a silver medal in Beijing four years previously. It knocked over seven minutes off his old Irish record (3:45:30) which, in race-walking terms, is well over a mile.

“Rob’s stunning performance in the London Olympics made him and easy choice for the 2012 award” stated Cork City Sports Chairman Tony O’Connell, “even though he had stiff opposition from the other monthly winners.”

Rob has already started his preparations for Rio 2016, at which time he will be in his prime in race walking terms. In the meantime he remains a great ambassador for  Cork and athletics. 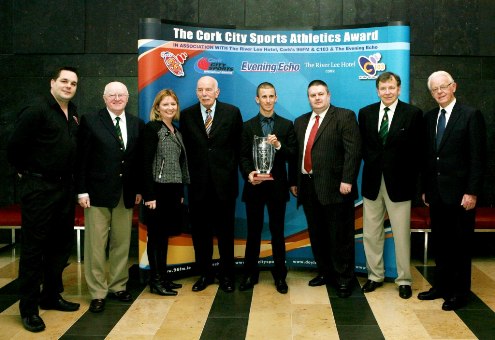 Images from the award ceremony: